Okay, I was going to write one earlier about all the auditions and who was going to win and all that, but it all happened so fast, and the WINNER HAS BEEN CROWNED.

Congratulations to Jules O’Dwyer and Matisse! 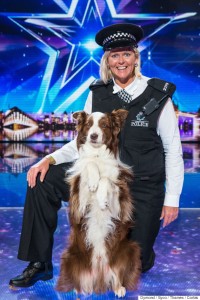 I really loved this year’s competition, however, I believe that something was wrong. Very wrong. All along, I thought there was a setup somewhere, or that I was being tricked into thinking something that wasn’t true. And I was right. Beginning with our very own runner up, Jamie Raven. WHAT, may I ask, is going on there?

His audition is pretty impressive. Until the internet lashed out, and we found out that Jamie in fact knew Simon Cowell, and that they had chosen the 7 of hearts together. In addition, his pack of cards is available on Amazon for £10 pounds (according to the internet). Is this true, I don’t know. But it certainly sounds true. So on to his semi-final performance. What was that? Okay, goldfish for David, cool, ice for Alesha, pretty good, shoe for Simon. You can clearly see when he drops the ice into Alesha’s hands that he’s taken his shoe off. He then flicks it back into his pocket, asks Simon for the word on his paper and flicks it back out of his pocket again. But then, oh my God, I could hardly believe it.

Wow. Wonder how he did that.

When I was younger, Britain’s Got Talent was always so fun to watch and when a magician came on, I used to wonder how he did all of his tricks. This isn’t even magic. It was just a huge setup with the help of the producers who clearly knew what was going to happen. Which is why this year, although I still enjoyed it, I wasn’t always excited for the acts. I was excited to see what kind of setup was next, especially when Jamie Raven was on.

I have no idea why I wrote this post, but I had to lash out in confusion somewhere. I must say that I’m happy with the results, even though there was some setups with Matisse’s act too (turns out he didn’t even do the stunt with the ropes). But honestly, I’m still pretty confused with this show.

Does anybody agree with me? Or have you spotted anything else the internet hasn’t?